Potential Penalties and Defences to Sexual Assault With a Weapon Charges 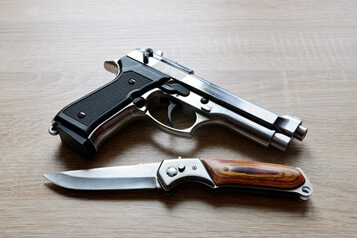 If you are facing a sexual assault with a weapon charge in Ontario, you need a skilled defence lawyer who can build a case to secure the best possible outcome. Your life is on the line when you are charged with this serious criminal offence, but our team will examine the details of your case and come up with a logical and effective defence.

What Is Sexual Assault With a Weapon?

In the Criminal Code of Canada, the crime of sexual assault with a weapon, threats to a third party, or causing bodily harm is defined as follows:

272 (1) Every person commits an offence who, in committing a sexual assault,

A person can also be charged with this type of offence, even if a weapon is not used, if it is alleged that they committed a sexual assault and caused bodily harm, choked, suffocated or strangled the complainant (i.e., the alleged victim). The "threaten to cause bodily harm" to a third person allegation refers to an assailant who threatens to harm a person other than the alleged victim in order to get the victim to comply. Being a party to an offence means that you aided or encouraged a person who committed the crime.

Penalties for Sexual Assault With a Weapon

Defending a Sexual Assault With a Weapon Charge

The consequences of a conviction for sexual assault with a weapon are severe and life-changing. This is not a charge you want to just plead guilty to in order to get it over with. It requires a vigorous defence from an experienced criminal defence lawyer.

The burden of proof rests with the Crown. They must prove beyond a reasonable doubt that the crime occurred and that you are guilty of the offence. Your lawyer will receive all of the evidence (i.e., 'disclosure') from the Crown regarding the complainant's version of events (video statements, police occurrence reports, police notes, other witness statements, physical evidence, electronic or social media evidence, photographs, search warrants etc.). Your lawyer will then carefully review the Crown's case with you and receive your full version of events during many meetings, with a view to creating reasonable doubt to win your case. These types of charges are very complex and typically require hundreds of hours of focused legal work by an experienced and skilled criminal defence lawyer in order to successfully defend you. Some of the many factual and legal strategies your lawyer might take include, but are not limited to, the following:

The Crown must prove a sexual assault occurred using the complainant's version of events and any physical evidence that might exist. Your lawyer will review this evidence to consider whether there is anything that can be disputed or challenged in court and whether you can create a reasonable doubt and win your case. In addition, this specific charge hinges on the presence or threat of a weapon. The Crown has to prove the weapon or threat existed at the time of the offence. If you never owned or possessed the weapon mentioned in the complaint, it is crucial evidence for the court to hear.

Even if you have no defence to the charges and admit you are guilty and want to resolve the charges for the lightest possible sentence, a good criminal lawyer can often get the charges reduced or minimize the amount of time you will spend in jail.

Do not jeopardize your freedom or your future if you have been charged with sexual assault with a weapon or any type of sexual crime allegation. The experienced and knowledgeable sexual assault defence lawyers at Kruse Law will work diligently to ensure your case has the best possible defence. Schedule a free meeting and quote, or call us toll-free at 1-800-699-0806 to speak with one of our professionals today.